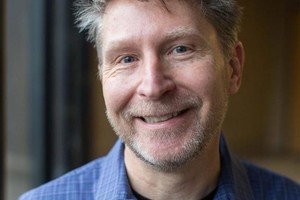 Join Jeffrey Jerome Cohen, Professor of English and Director of the Institute for Medieval and Early Modern Studies at the George Washington University, for a gallery-based talk in conjunction with “The Keeper.”

Outside the Box offers a roster of gallery-based talks given by a variety of guest speakers over the course of a season. In this series, lecturers with diverse backgrounds and affinities will address the New Museum’s summer exhibition “The Keeper” in forty-five- to sixty-minute presentations taking place exclusively in the Museum’s galleries. As a way to emphasize the Museum’s strong commitment to new art and new ideas, Outside the Box Gallery Talks are open to the public and are intended to provide participants with multidisciplinary perspectives on New Museum exhibitions. To this end, lecturers will speak about the exhibition or themes emergent in select works from the various positions they occupy—be they academic, personal, political, or otherwise. With their distinct individual relationships to the artists and works on view, lecturers will engage in rich investigations that will illuminate and probe the Museum’s current exhibition program.

All Outside the Box Gallery Talks are free with Museum admission, but attendance is limited. Please RSVP here for more information and to request tickets.

Jeffrey Jerome Cohen is Professor of English and Director of the Institute for Medieval and Early Modern Studies at the George Washington University in Washington, DC. His award-winning research examines strange things that challenge the imagination—phenomena that seem alien and intimate at the same time. He is especially interested in what monsters, foreigners, queer people, inhuman forces, objects, and matter that won’t stay put reveal about the cultures that dream about, fear, and desire them. Cohen is widely published in the fields of medieval studies, monster theory, and ecocriticism.