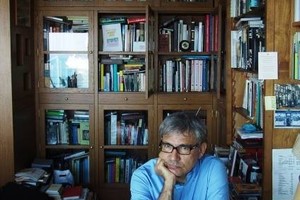 Join us for a conversation between preeminent writer and Nobel laureate Orhan Pamuk and Massimiliano Gioni, Edlis Neeson Artistic Director, on the occasion of the New Museum’s exhibition “The Keeper.”

Through his novels and writings, and the Museum of Innocence, which he founded in 2012, Pamuk has presented a case for museums of the future that are human in scale and egalitarian by nature and that take the place of more monumental, essentialist, and dissociative institutions. Pamuk has argued that museums can best convey the depth and richness of humanity by telling the stories of single human beings, rather than by constructing grand historic narratives that purportedly represent an entire society, community, nation, state, or species. Pamuk and Gioni will discuss the author’s Museum of Innocence, his writings, and the collections included in “The Keeper,” which similarly tell the stories of individuals through the artworks, objects, images, and ideas they chose to safeguard and endow with exceptional significance.

Orhan Pamuk is one of Turkey’s most prominent novelists, and his work has been translated into more than sixty languages. Among his books are Cevdet Bey and His Sons (1982), The Silent House (1983), The White Castle (1985), The Black Book (1990), The New Life (1994), My Name is Red (1998), Other Colors: Essays and a Story (1999), the political novel Snow (2002), Istanbul: Memories of a City (2005), The Strangeness in my Mind (2014), and The Red-Haired Woman (2016). In 2008 Pamuk published The Museum of Innocence, a novel about a man’s lifelong infatuation with a young woman and his attempt to build a museum housing the objects associated with his love for her. In 2012 Pamuk founded the Museum of Innocence, which was inspired by his novel, in the Çukurcuma neighborhood of Istanbul. The catalogue of the museum’s collection, The Innocence of Objects, was published the same year. Pamuk has received numerous prestigious international prizes for his writing and his museum, including the Prix Méditerranée Étranger, the Prix Médicis, the Ricarda-Huch Prize, and honorary membership in the American Academy of Arts and Letters. In 2006, he was awarded the Nobel Prize in Literature.